The 5-stage suspension preheater cyclone is the device inside which the cement raw meal performs heat exchange with hot gas from the rotary kiln and is preheated. It is one of the key equipment in the cement clinker production line, and its efficiency directly affects the production efficiency of the whole plant and product clinker quality.

The index we usually use to measure the efficiency of the preheater cyclone is the gas-solid heat transfer efficiency, also thermal efficiency, which is the percentage of heat gained by raw meal to the total heat input into the preheater system.

Here are some key factors that may affect the thermal efficiency, which need to be well controlled.

The suspension rate means the mass percentage of the feed material floated into the cyclone.

In the preheater cyclone, more than 80% of the heat exchange capacity is completed instantaneously in the inlet pipe of the cyclone, if the powder material was fully and evenly dispersed and suspended in the air flow.

Normally, the material fed into the preheater cyclone will be dispersed by the rising hot air and suspended in the upper cyclone. If some material particles are too large to be floated by air flow after falling for a certain distance, once it leaves the lower inner cylinder, due to the sharp decrease of air flow rate, this part of material won’t be suspended and preheated in the upper cyclone, which reduces the preheating efficiency.

The table above shows how the suspension rate affects the thermal efficiency of the whole preheater system.

We could take following measures to ensure a high raw material suspension rate:

The system solids-gas mass ratio is defined as the mass of solids over the mass of gas inside the preheater cyclone.

We can take following measures to increase separate efficiency:

Internal air leakage: the waste gas from the lower cyclone flows back to the upper cyclone through a loose flap valve. Although it doesn’t increase the total gas volume of the system, it will have a significant impact on the separate efficiency when exceeds a certain limit. When the internal leaked air volume exceeds 2%, the separate efficiency begins to decrease, which leads to a decrease in the thermal efficiency of the whole system.

External air leakage: the cold air from the atmosphere leaked into the preheater cyclone. The cold air leaked in reduces the temperature of the hot gas, and also reduces the solid-gas mass ratio of the system, which leads to thermal efficiency decrease.

According to the above analysis, for the 5-stage preheater cyclone, to achieve the best thermal efficiency needs: to make the material quickly and evenly suspended; to control the solid-gas mass ratio close to 2; to strengthen the material dispersion; to strictly prevent the system from air leakage. 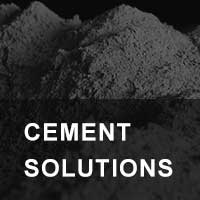